'In the Shadow of Women' DVD: French New Wave Style Look at Intricacies of Infidelity 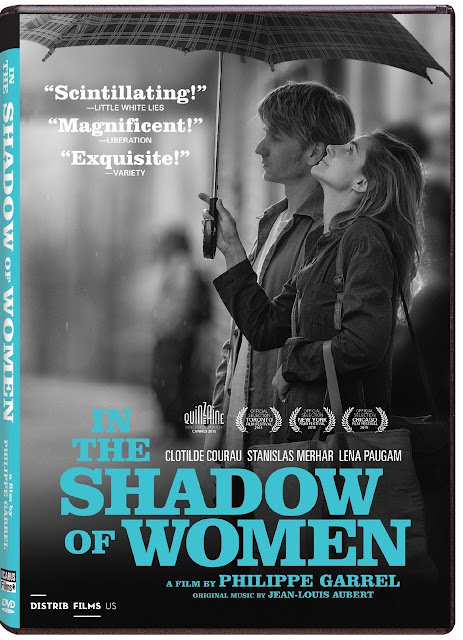 The Icarus Films DVD release of the 2015 French drama "In the Shadow of Women" proves that this primarily documentary home-video distributor looks for "innovative and provocative" titles regarding its fictional titles as well. The strong documentary elements of "Woman" make it a particularly apt addition to the Icarus catalog.

The festival love for this future art-house classic include the Best Film honor at the 2015 Athens Panorama of European Cinema and the Best Actress win at the 2015 Seville European Film Festival.

The most overt documentary element in "Women" is central character Pierre being a documentarian whose spouse Manon fills several roles that include researcher and film editor. Additionally, filmmaker Philippe Garrel regularly provides exposition via voice-over narration. Having the camera largely follow the characters around and simply record their conversations and reactions to events further contributes to the cinema verite vibe of the film.

The film being in black-and-white enhances the French New Wave aspects of "Women."

The following YouTube clip of a film festival trailer for "Women" nicely highlights the artistry and overall Frenchness of the film.


The early scenes establish that Mannon working with Pierre is a holdover sacrifice from his days of struggling to establish his career. One reason that the couple still works together is that Mannon sees this as an opportunity to spend time with her husband.

The proverbial fateful encounter that jeopardizes many reel (and real) couples occurs when Pierre stops to help intern/grad. student Elisabeth bring several canisters of film to a parking lot. This leads to an affair that soon leads to indifference and boredom by Pierre, who believes that being a man entitles him to have an affair.

The response of Manon to the changes in Peter include starting an affair of her own. The response of Pierre to learning about that extra-marital activity is resentment and rage despite his knowing that Manon knows of his relationship with Elisabeth.

The "B Story" in the film revolves around Pierre and Manon interviewing a man about his experiences with the WWII French resistance for a film that Pierre is making on that topic. The drama related to that extends well beyond the subject being particularly personal to Pierre.

All of this leads to a somewhat surprise ending that shows the need for reflection and the related value of deciding what you will sacrifice for something that you think will more than offset that consideration,

Anyone with questions or comments regarding "Woman" is encouraged either to email me or to connect on Twitter via @tvdvdguy.
Posted by Matt Nelson at 7:39:00 AM