'MGM: When the Lion Roars' DVD: Epic Documentary on a Former Junk Dealer and His Empire 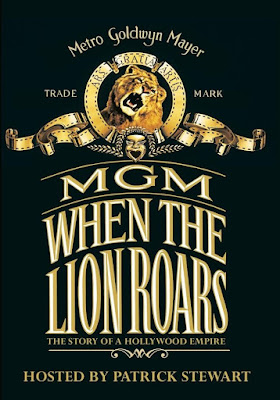 The meta element relates to host/narrator Patrick Stewart sharing in Part I (titled "The Lion's Roar") of "Lion" that movie-chain owner Marcus Loew financially backs essentially real-life "son" of a "Sanford and Son" "empire." Loew supports Louis B. Mayer deserting the family scrap-metal business to enter the movie business to provide Loew a steady stream of quality movies for his theaters. A big part of this plan is the commitment of Mayer to produce one full-length good-quality feature film a week.

A SPOILER is that this series ends with Ted Turner purchasing MGM primarily to acquire the film library that includes the oh-so-many classics that "Lion" lauds. A primary motivation of Turner is to acquire material for his cable networks ala Loew backing the studio decades earlier to have something to project on his screens. The metaness continues with subsequent events leading to DVD releases of MGM films heavily contributing to the ability of Archive to remain in business.

The final bit of commentary on this subject is that Turner buying MGM to air its films and cartoons on his networks blindingly outshines The Learning Channel providing "Here Comes Honey Boo Boo" a home and American Movie Classics filling its schedule with weekly television series. This is not to mention the complete lack of music on Music Television.

Another general theme that pervades "Lion" is the emphasis of Mayer on making films that provide escape from macro and micro woes; this is exactly in line with the Unreal TV philosophy that fictional series that range from the sublime to the awesomely ridiculous have infinitely more value than reality shows. A personal "Lion" meta element of this is you not-so-humble reviewer often turning to the (former Warner division) Rhino Video DVDs of the daddy of all '60s fantasycoms "My Favorite Martian" during a particularly stressful summer.

The aforementioned Roaring '20s history in Part I of "Lion" largely focuses on the role of 20-something boy genius/former Mr. Norma Shearer Irving Thalberg, who literally is with Mayer from day one. While Mayer is the expert at spotting talent (including Great Garbo) and keeping every MGM employee (some that you recognize and some that you hardly even heard of) in line, Thalbnerg is the logistics geek who largely is responsible for maintaining the aforementioned ambitious production schedule. He further can be considered the inventor of the modern focus group.

This episode additionally provides a fairly comprehensive history of the early days of the Hollywood system. We get the story behind the original "Ben Hur" and other silent classics, as well as learning that the impact of talkies on actors extends beyond ruining the careers of stars who demonstrate that they are to be seen and not heard.

Much of this comes from the horses' mouths in the form of MGM staffers and stars of the era in archival interviews and sessions filmed for "Lion." The most notable of theses is First Lady of the American Theater Helen Hayes.

We further get former child stars Rooney, Jackie Cooper, and Freddie Bartholomew discussing their individual films and the overall role that Mayer expects his youngest contract players to perform. This includes never asking for a raise, always showing up for Sunday afternoon parties at Chez Mayer, and earning their keep.

The best wisdom in the entire series comes from the mouths of these former babes; Cooper discusses not taking his acting seriously until becoming 14 and seeing older boy Rooney showing that kids can perform well; a clip of Rooney that follows validates the statement of Cooper. Rooney shares that "I once lost $2 at the track; I spent $3 million trying to win it back."

The story of Judy Garland dominates the coverage of child stars; her "boys" (especially Rooney) express their love for her; the adults contribute the poignancy in segments that include Garland stating in her 20s that her only regret was not having a childhood.

This review being so long without even mentioning the suspicious deaths, celebrity rumaway bride, and other scandals in "Lion" or the segments on "The Wizard of Oz" and other epic MGM classics of the '30 provide a context for having to mostly limit coverage of Part III of "Lion" to the Turner acquisition. A thoroughly inadequate recap of the studio from the '40s to the '80s is that Vincent Minnelli and others take musicals off the stage into the real world, WWII greatly influences MGM and its actors alike, MGM adapts to the competition from television, seemingly endless power struggles, etc.

Anyone with questions or comments regarding "Lion" is strongly encouraged either to email me or to connect on Twiiter via @tvdvdguy.