'Lyle' DVD: Thriller on Sacrificial Deal With Devil to Have Child 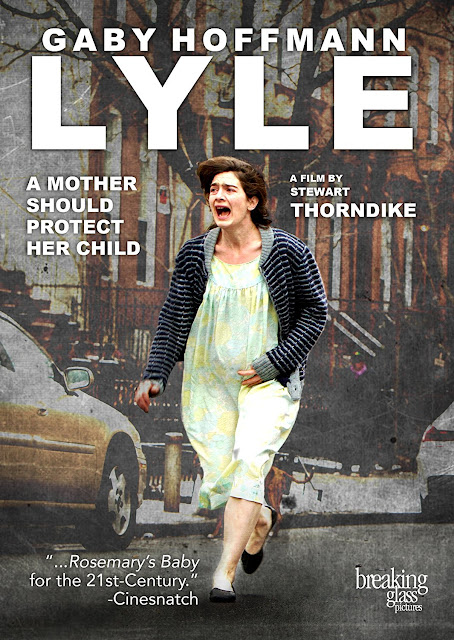 Breaking Glass Pictures stays true to its commitments to distributing edgy and/or gay-themed fare regarding the DVD release of the 2014 thriller "Lyle." This one has "Transparent" star Gaby Hoffman as expectant mother Leah, who has reason to believe that something is Satanic in the state of Williamsburg (Brooklyn).

The following YouTube clip of the SPOILER-LADEN "Lyle" trailer shows the mix of indie film and big-budget thriller that makes the film unique.


The nature of the relationship between stay-at-home mom Leah and long-term partner/professional musician June most likely is the basis for Breaking adding "Lyle" to its impressive catalog; the theme of this couple being just like many straight ones in that Mom stays home with the titular toddler while pregnant with the second child and "Dad" works long hours (which strains the "marriage") and largely views Mom as a hysterical female is true to the Breaking philosophy that movies with gay leads can be just like ones in which the main characters are straight.

In typical New York City horror movie style, "Lyle" opens with our couple and their child touring a too-good-to-be-true Brooklyn apartment. Although Leah is skeptical from the beginning, June essentially tells her not to worry her pretty little head about it. The incredible deal on the place and weird landlady Karen being obsessed with getting knocked up are the primary sources of the angst of Leah.

The first indication that Leah has good reason to worry her pretty little head is that Lyle begins acting very strangely; a subsequent indication that Karen is not being truthful regarding a statement that a child never has lived in the apartment triggers additional concern.

The spidey sense of Leah goes off the charts after a tragic event involving Lyle. This prompts an investigation that uncovers evidence of prior nefarious doings in the building. All this supports the theory that just because someone is paranoid does not mean that no one is watching.

In classic thriller style, the conflict escalates to a point that Leah does not trust anyone, and all efforts to soothe her fail. This leads to a climax and ending very similar to another film in which a mother-to-be fears that evil forces have a role in her pregnancy.

Hoffman does a good job carrying most of the film; her portrayal of Leah is sympathetic and mostly believable; harm befalling a child is tough for most mothers, and feeling that you cannot trust your life partner is distressing. Throwing in a threat to an unborn baby is enough to stress out anyone.

Breaking further follows its successful formula by including a short film by "Lyle" writer/director Stewart Thorndike. This one involves the bizarre home life of a child.

Anyone with questions or comments regarding "Lyle" is encouraged to email me; you alternatively can connect on Twitter via @tvdvdguy.