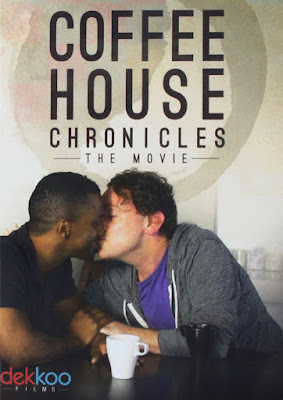 "Chronicles" consists of episodes of the anthology web series of the same name. Proof that these tales of the city are true includes a real story of an in-person meeting after connecting on Craigslist ending on the second person to arrive at the restaurant immediately stating that he is leaving, throwing money on the table, and walking out.

The following YouTube clip of a "Chronicles" trailer seemingly includes scenes from all 10 vignettes in the film; every gay man watching should see himself and/or someone in his life in most of them.


The stereotypes in this witty series begin with a nice-looking 30-ish man arriving for a date with a man from an online dating app. Efforts to avoid the equally stereotypical effeminate white man idiotically smiling and frantically waving fail. This queen literally latches onto the man who is expecting a masculine black man. This leads to a hilarious joke about misleading online profiles and the pest apparently losing his African-American heritage.

We later separately meet the same couple in equally relatable stories. The dupe learns the value of getting to know a man before being on the receiving end of both forms of sodomy, and the queen shows the value of a promise of exceptional sex.

The opening segment reflects one of the sad but funny truths about online gay dating; many men assume that a profile understates weight by at least 10 pounds and age by at least 5 years. This is not to mention profile pictures often being at least five years old. All of this regularly leads to the self-fulfilling prophecy of posting misleading profiles; the silly aspect of this is that the ugly truth comes out when a meeting occurs.

Speaking of misstating ages, the arguably best (and best acted) segment in "Chronicles" centers around a high-school boy whose online profile grossly exaggerates his age meeting a man whose profile shaves a few years off of his page. Their rationales for lying reflect the hazards of being truthful in that matter.

More depth comes in the form of the cute and likable boy wanting experience with someone who knows what he is doing, and the man wanting to be a positive (not in THAT way) influence on the boy. The adorable and tempting efforts of the boy to get the man to make him a man and the responses of the man to that campaign perfectly reflect that theme. The age and sexuality based hostility that the pair experiences merely for talking in public contributes additional reality.

The scope of "Chronicles" extends to an amusing scene centered around transsexuals; the message here is that transitioning does not change much regarding dating attitudes.

Anyone with questions or comments regarding "Chronicles" is encouraged to email me; you alternatively can connect on Twitter via @tvdvdguy,