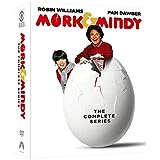 The most exciting news about the long-overdue (but well worth the wait) December 9, 2014 DVD release of the 95-episode complete series of "Mork and Mindy" is that any fears that this release is intended to profit from the August 2014 suicide of "Mork" star Robin Williams are COMPLETELY unfounded.

The recent (and expedited) renewed surge of DVD releases of "Happy Days" (including the recently reviewed S5 of that '70s sitcom and soon-to-be-reviewed S6) and its spin-offs after long dormancy periods strongly suggests that CBS Home Entertainment planned both this "Mork" release and the concurrent release of S4 before the death of  Williams. Additionally, the CS set lacks ANY mention of Williams passing.

The set further comes in a sturdy plastic clamshell case and has each of the 15 discs in separate non-overlapping spots. The outer packaging is a solid cardboard sleeve.

Although having an episode list for each disc is nice, even a one-sentence synopsis of these shows would have been terrific. (The S2 and S3 sets do have short episode descriptions; it is presumed that the S4 set does as well.)

A heartfelt August 2014 Unreal TV post on the value of Williams to the fans who followed his career from "Mork" onward communicates how awful exploiting his death would have been. Williams is the John Lennon, John Belushi, or Kurt Cobain of those of us who spent the late '70s in elementary or junior high school.

Rather than reality, the concept around which "Mork" is based is a character with origins in Williams' standup act. The titular oddly named being is a native of the planet Ork who is on earth to observe our culture and use telepathy to weekly report back to his superior Orson, whose deep voice and wide girth clearly make him a namesake of Orson Welles, on Ork.

The titular Mindy is a 21-year old all-American girl, played by Pam Dawber, who meets Mork almost immediately on his landing on the outskirts of Boulder, Colorado. In true sitcom style, the pair immediately begin platonically sharing the wholesome apartment in which Mindy resides.

The pilot also brings Mork, who first appears in an S5 episode of "Days" several months before the 1978-79 season in which "Mork" premieres, back to his roots. A desire to learn more about male-female relationships has Mork consulting with self-proclaimed love expert Fonzie.

Fonzie provides the requested assistance in the form of having Laverne DeFazio of the "Days" spinoff "Laverne and Shirley" date Mork. (The aforementioned 2014 "Days" DVD bonanza includes the reviewed S7 and also covered S8 of "Laverne.")

This historic episode is the one time that actors from "Days," "Mork," and "Laverne" appear together. One can only hope that the recently reviewed "Joanie Loves Chachi" also would have been represented had this "Mork" episode not predated the premiere of "Joanie."

The chemistry between Fonz portrayor Henry Winkler and Williams in this pilot, the previous "My Favorite Orkan" "Days" episode, and the Spring 1979 "Days" clip show in which Mork explains that he is doing a spin-on to out of appreciation for his spin-off prompts sadness that Winkler and Williams did not go out to co-star in a series or films.

The hilariously catastrophic date with Laverne, a search for a human-sounding voice back in 1978, and a scene in which Mork becomes intoxicated are early examples of opportunities that the "Mork" writers provide Williams to engage in his manic improvisation and frantic physical comedy that makes him so special and that sets "Mork" above sitcoms from any era.

The following classic clip, courtesy of YouTube, in which Mork literally allows his emotions to run wild PERFECTLY illustrates Williams' talent to ride a churning stream of consciousness.

Further, the first harsh lesson in the reality of American life that Mork experiences is very relevant today. His eccentric behavior results in being taken into custody and subjected to an administrative hearing to determine whether he should be confined in a psychiatric facility.

This relates to the long history of labeling folks who do not conform to societal norms as mentally ill. A friend describes this as making someone pay either for hurting the feelings of another or for having the audacity to share awful and/or inconvenient truths.

The need to not have this review rival a latter Harry Potter novel in length requires skipping over the experimental middle seasons that introduced squabbling deli-owning siblings and other secondary characters to touch on the fourth season.

A rapidly-paced story arc at the beginning of S4 has our titular characters tying the knot and Mork laying and hatching an egg that contains their newborn baby Mearth, who has the appearance of a 50-something man. Legendary comedian (and Williams' mentor) Jonathon Winters famously plays Mearth and awesomely provides Williams a playmate who can keep up with him.

The introduction of this character further freshened "Mork" by providing someone who could replace Mork as the naive newcomer to earth.

The introduction of Mearth additionally provides Williams and Winters a plethora of opportunities to assume characters and riff for extended periods that present the challenge of editing that material down to several minutes.

The fourth season is notable as well for having some of the best guest shots of the series. William Shatner appears in a very Kirk-like role and legendary actor John Houseman is hilarious as the voice of a computer gone wonky.

One sad aspect of "Mork" is that filming the season finale before learning that the series would not be getting a fifth season prevents any form of special sendoff. At the same time, it is nice to think that this modern family is still living their daily lives.

The extras include three gag reels, at least one of which provides a great candid look at Williams doing his thing, and the aforementioned "Days" episodes.

Wrapping all this up is very tough (and prompts leaking eyes) because it feels like once again losing Williams. Like many comic geniuses, you either got him or did not.

Further, folks who regularly spontaneously do things such as comically engaging in the style of bitter sniping that makes the Elizabeth Taylor Richard Burton film "Who's Afraid of VirginiaWoolf" so awesome to the confusion of those around them and who understand the world as deeply as Williams feel his pain.

Having to conclude these additionally makes one wish to be more Orkan regarding an enhanced ability to control emotions.

However the desire to keep classic DVD in the public consciousness that drives this site requires encouraging folks to plunk down the roughly $90 for which it is selling.

Anyone with questions or comments regarding "Mork" or Williams is strongly encouraged to email me. You can also connect on Twitter via @tvdvdguy.